The Moluccan Lory or the Red Lory is native to the south-eastern part of the Maluku Islands in  Indonesia, which includes the Ambon, Buru, Goram, Saparua,  Seram,  Seramlaut, Indonesia, Watubela and the Kai Islands. Their natural habitats that they are found in are tropical moist lowland forests and tropical mangrove forests.

The life span of the Moluccn Lory is years 25 to 30 years.

The Moluccan Lory is a large Lori, growing to 31cm long. They are mostly a bright red in colour with some blue on the sides of the face as well as some black and blue feathers in the wing.  The Moluccan Lory tail is red-brown with blue under -tail covert. The Moluccan Lori has a orange beak Beaks are orange, with grey legs

The male and female are identical in appearance and Juveniles are duller and have brown irises and a brownish beak. 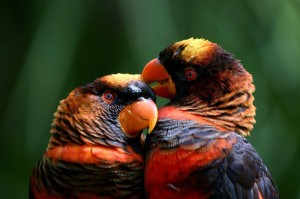 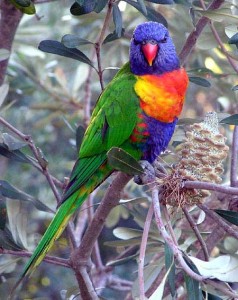